I’ve blogged before about QR codes here a few times (like here), and it’s a trend I’ve been following for some time now.

Here in the US, adoption of QR codes has been very slow compared to adoption rates in Asia and Europe. There are a few reasons for this. While smart-phone use is on the rise, the majority of cellphones aren’t used to access the web. Sure, people do a ton of texting here, but they aren’t doing much else on the mobile web, yet. The other barrier to entry is the fact that there just isn’t the software installed on most phones to read the codes and do something with them.

I have an iPhone, and there are a few free and paid apps that will read and do something with QR codes. Similarly, there are readers for Android and Blackberry, but users of these types of phones can install software easily and quickly. LG EnV users? Sorry, it’s a little harder.

I ask these questions because I’m starting to see QR codes pop up in more and more places – even my local donut shop. Last weekend, while taking my boys out for breakfast, I noticed this sticker on the door to the local Tim Hortons. 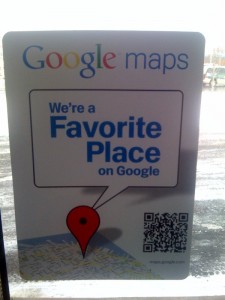 I took a photo of the code, which led me to a Google listing for this particular Tim Hortons. Neat, but I already know about this Tim Hortons. I was there already. Perhaps soon people will take QR codes to the next level. If I take a shot of that code, I should get an email or text with a coupon for 5 free TimBits or 25% off a flavored coffee. The technology exists in Google’s program, more and more people should take advantage of it. 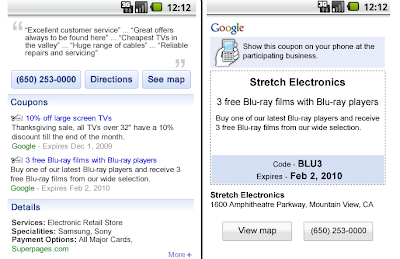 So, are QR codes going slightly more mainstream? I’d say yes. Are we using them for neat things in higher ed? Not yet, but we should.

I’ve started lobbying at my institution to start putting QR codes on some publications we do. Of course, only a small audience would be using their phones, but it would be very interesting data to see what the adoption rate is amongst users out there. The code wouldn’t need to be very big – here’s a quick example I mocked up last year. You can click to see a larger version.

The URL contained in that QR code could have Google Analytics data enclosed in it to it could be tracked, or it could be personalized so when I visit I see my name or some other custom data.

Last year at the Institutional Web Management Workshop at the University of Essex, I attended a session on QR codes and we broke into small groups to talk about how we could use QR codes to do cool things at our institutions.

One school created signs with QR codes saying welcome in Chinese for international students who were arriving there to study. Others had ideas for how to integrate QR codes into library and other research tools.

Adam Palin from Ashton Sixth Form College and I thought about an idea after realizing we had one thing in common – a name badge. You meet a lot of people at a conference, and you’re interested to learn more about them. Sure, you can swap business cards but I quickly lose cards. Since we all don’t have iPhones we can “Bump,” wouldn’t a cool way to learn more about a person be a QR code?

Our idea was this:

A simple web app could be built with everyone’s contact information, school, Twitter link, Facebook profile, email and more. Then, on the front or back of everyone’s ID badge would be a QR code. When you strike up a conversation during a conference, instead of sharing paper (that’s so 20th century), you’d instead take a quick snap of the QR code on their badge, would would automatically take you to their profile and contact information. Creating custom QR codes is trivial, as is a web app, but I think a system like this would be awful easy.

This is already happening at some tech-y conferences, such as the UK Museums on the Web conference in the UK. Here’s a blog post by a developer who implemented a system there to do exactly this.

EduWeb and HighEdWeb – I’m looking at you. Let’s do this. I will coordinate it. I think it’d not only be a neat thing, it would be a pretty valuable tool. We’d make people’s lives easier and get QR codes out there to a more mainstream audience. Who wants to be on the leading edge of this?