In days past, the best way to reach a large audience of people was to use a press release. You could spend hours to craft a message, create quotes, and prepare it for delivery. You’d then send, or even fax, the release to media outlets in the hope they’d pick it up and spread the news for you. For the big news, you’d pay a service to send out the release to hundreds or thousands of places.

Then came the Internet. Thanks to websites, and eventually blogs, companies, organizations, and even individuals could spread the word on their own terms, and at less cost.

Now, we are experience peak social media. There have never been more outlets for companies, businesses, and people to have direct access to customers, influencers, other brands and more.

Yes, a screenshot. Usually of a notes app on someone’s phone, where they’ve typed or copy and pasted and then taken a screenshot. It’s a genius way to get around the character limits of a platform like Twitter. If you want to read the entire image, you just view the full-size image.

One audience I’ve seen using this new “press release” lately are college athletes who are announcing their departures from college to go pro. Here are two recent examples: 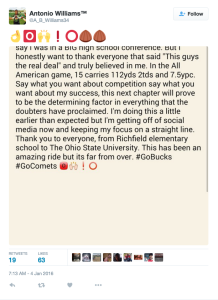 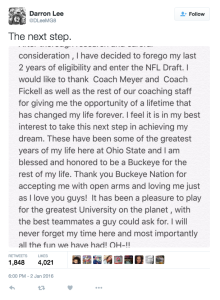 The University of Missouri was one of the first schools I’ve seen use this when they used a screenshot to share a statement from campus leadership back in November of 2015. 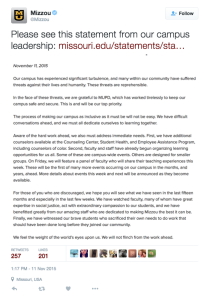 It’ll be interesting to see if larger and larger companies start to use this method for sharing news. In higher ed, I could see using it for weather closings, all-clears after emergencies, schedule changes, large announcements, and more.

3 thoughts on “Are Screenshots The New Press Release?”