Last year, I wrote about my experience of getting to 500,000 public story views on Snapchat. While fully acknowledging that I am not Snap’s target demographic, it’s been interesting to watch the rise, dip and potential rise again of this company. This is a critical time for the social media platform, as new networks like TikTok are gaining a lot of steam globally, especially in higher ed.

Today, I write to let you know that earlier this summer, I crossed the million public story views milestone. On my Snapchat. I know, it’s nutty.

It’s strange to think people around the world have watched 40 days worth of my content. My content? It’s not terribly interesting. It’s a lot of food shots taken while I’m travelling and vinyl I’ve been listening to lately. 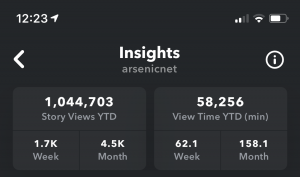 Observations on a million Snapchat views

First, Snapchat isn’t dead. While it’s certainly not aimed at me and people my age, it’s still used heavily by its younger users. My oldest is nearly 18 years old, and most of the time his phone is open to Snapchat or Instagram. It’s a big communication tool for one to one and group chats.

Second, the analytics available to power users haven’t changed all the much. I wrote about Snap’s analytics tools when they first launched last year and the tool hasn’t evolved. The stats are still top level, and while they’re interesting (location, interest), they aren’t much more than superficial. There isn’t much in the way of actionable intel here to work with or make decisions with. Snap tells me I’m popular in Greater London as well as my public Snaps are 7x more popular than average amongst people who are fans of cricket. I dig cricket, but I’ve never posted a Snap or story about cricket. There’s a lot of room for improvement here.

Third, consistency is key when it comes to views. When I was posting regularly, often daily, I would get more views, often to the tune of 7-10k views per story.  I haven’t posted much this year, and that number hovers between one and two thousand views per post. If you want to grow your public views, post a lot and regularly.

Finally, Snap will still not give you a total number of views. Maybe if you’re a big brand that has a high ad spent, you can see those types of analytic data, but I can’t. I’d love to know how many people follow me, instead Snap just tells me who recent followers are. That’s disappointing.

I hope Snap rebounds and keeps adding new and interesting features. They certainly are doing great work around their lens and filters and just this week they announced a new version of their Spectacles wearable.