This year has been much different than we all expected. Obviously. Sorry for the hyperbole, but it’s true, especially when it comes to hosting events in higher ed. We all saw our large planned events like admitted student open houses, commencement, alumni reunions, lectures and more postponed, done on Zoom, or cancelled.

Perhaps we need to rethink how we’re doing live events in higher ed, and not just during a pandemic. Let’s be honest, this won’t change once this pandemic ends or a vaccine is available. People are going to be apprehensive of large gatherings for the foreseeable future.

I watched a live event this past weekend that really opened my eyes to new ways to do live events, and it came from a Scottish rock band called Biffy Clyro.

Before I go much further, I’m a big Biffy fan. I’ve seen them four times, I’ve got all their albums (many on vinyl.) Last week, they released their eighth full length album, A Celebration of Endings. Traditionally, a band would release an album and do promotion around the world, including live shows. Since just about every live, in-person event is cancelled, it’s forced artists to find alternate ways to connect with fans and promote their work.

Biffy Clyro are no different. In addition to an acoustic series earlier this summer, the band promoted a live worldwide event where they would be playing their entire new album live. Prices started at $20 and went up from there. Costs were slightly higher if you ordered a CD or vinyl along with your purchase.

I will admit I was skeptical at first about the event, despite being a super fan. I was apprehensive about the quality of the stream, given the cost, for an event that would be less than 90 minutes.

Thank goodness I had a change of heart and bought a ticket. The show was absolutely awesome. 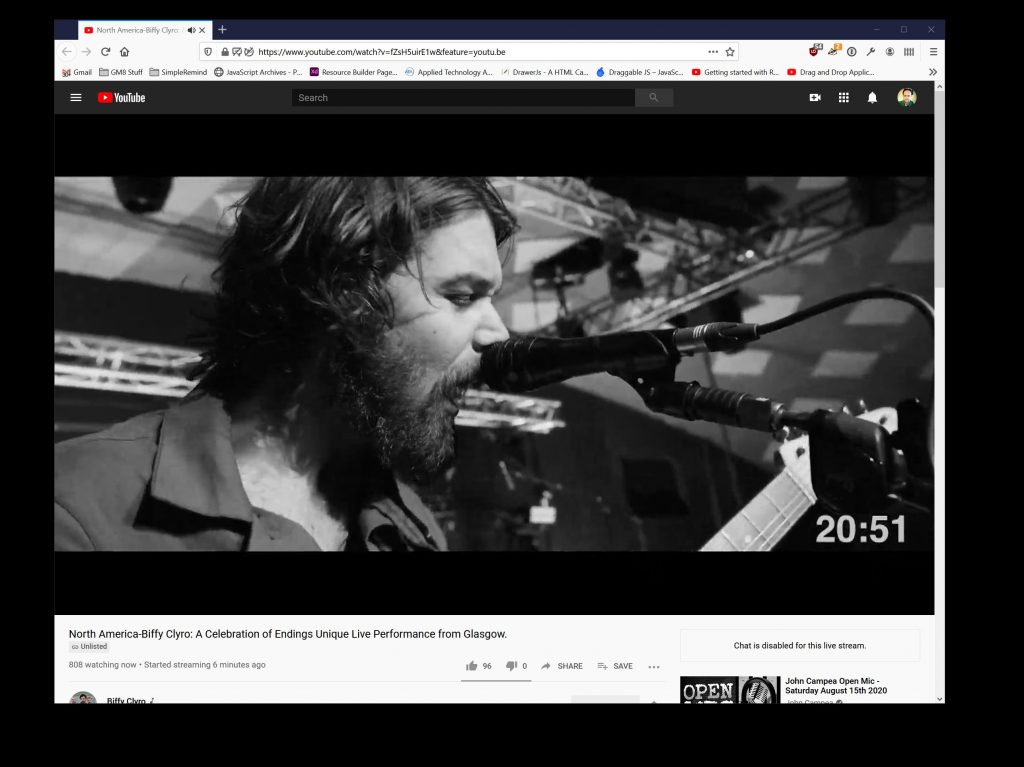 There was a 30 minute pre-show before the album playthrough started, consisting of the band playing some older tunes in soundcheck as well as a few acoustic numbers., During those acoustic songs, the band used one of those binaural head microphones so the sound was all around you. The band took full advantage, walking around the mic singing and playing. Finally, some behind the scenes footage from the studio was shown, and then it was showtime.

The band kicked off the album playthrough in the famous Barrowlands ballroom in Glasgow, Scotland. They started on stage playing a few songs, but as the set went on, they spread out all over the event space, including the floor where the audience usually is. A string quartet joined them there, along with additional instruments. A third set filled the corner, but the highlight for me was when the band moved to large glass cube to play, not unlike their performance for BBC Radio 1’s Big Weekend earlier this year.

Here’s the thing about this event. It wasn’t technically live, happening at the exact moment I was watching it. It was pre-taped, despite being promoted as being live. It’s nitpicking, but I guess technically the band was indeed playing live. Even though the show was 1 long live event, it was recorded a few days before for the reasons I mentioned before. For as high a profile event as this, you couldn’t afford to have anything go wrong and keep your paying customers from getting what they paid for. Recording it in advance also let the band stream it at different prime time slots around the world. The UK and Europe got the stream at 9pm their time, and we got it a hours later here in the U.S.A. Given the high level of production that went into this show, I don’t mind it was pre-recorded.

The ticketing process was also interesting. About an hour before the show, customers were sent their ticket. The ticket consisted of a link to an unlisted YouTube live stream of the event. You may have noticed the fact it was YouTube in my screenshots.

In a way, hosting the stream on YouTube is genius. Why not use the infrastructure of maybe the world’s largest technology company (Google) to deliver your product. After all, YouTube is setup to do live streaming, will stop people from downloading the stream (best they can) and turn the video off at a certain time. This greatly reduces the barrier of entry for colleges, universities and small businesses. That has to be easier than maintaining a video streaming infrastructure.

Does that mean that I could have shared my link with everyone I know? Sure. That’s definitely something to think of you are going to use YouTube as your technology back-end.

What does this mean for higher ed?

I can see this becoming an interesting option for some campus events going forward.  Having the ability to pre-record, edit, caption and more before a promoted event would be a lifesaver for over-stretched marketing teams.

This type of setup would be great for a “live” admission event, for example. You could pre-tape introductions from your president, admission leader, students, even do things like a campus or dorm room tour. There would be no live Zoom challenges or lighting or bad sound, sketchy backgrounds and more.

You could set the video to premiere at a certain time and promote that as a big event. It’d be up to you if you want the chat to be there, but if you do, have a moderator there. If your school has award ceremonies, such as an alumni awards event or academic awards, a pre-taped “live” event might make sense.

This model would work for free events but I can see a market for paid events. There’s an opportunity here for an alumni office to offer a 30 minute presentation by a beloved faculty member (though it would mean not take live questions.) Perhaps its a musical performance by students or faculty. A poetry reading would be a great experience.

And what’s nice about this method is that you aren’t limited by location. Sure, you can tape a faculty member reading poetry in a lecture hall or auditorium, but why not have them read from the top of the bell tower? Your virtuoso guitar student? Have them play in the middle of the quad while they circle around you and your immersive microphone.

There’s so much opportunity there to do something really special and break out of very boring Zoom calls and streams we’ve been doing for the last few months. I’ve blogged about tips to improve your videos in the past, it’s worth revisiting if you’re taking on more video in the year ahead. 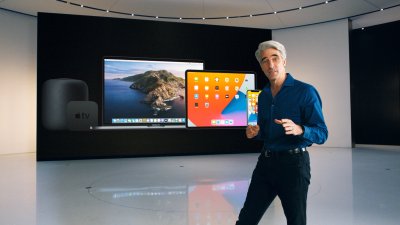 A great example of this type of event was Apple’s WWDC keynote this past June. They pre-recorded bits from around their amazing new campus and it really helped drive the story. Instead of watching slides on a screen behind someone on the stage, you were watching that person in Apple’s silicon development lab. It really helps sell the message.

When it comes time to promote your “live” event, you can drive interest by using scarcity. Even though using video and a platform like YouTube means your video can be online forever, you can limit access, much like the Biffy show. Once the show was over, I couldn’t go back and re-watch it. It was live, and one show only. And I’m okay with that, it made the experience feel special and made me pay more attention and be more engaged. I wasn’t checking my phone, or had the video playing in another window. My son and I sat around my nice big monitor and good speakers and shared the experience together.

I want to say I am still a fan of the live event. My family attended many such events this past spring and summer and they were very informative. They were a great way to connect with schools on our son’s list and narrow down where he would end up going.

But this… this could be something really special for this next academic and going forward.